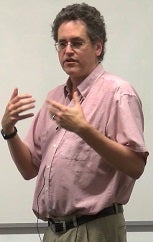 Dr. John Carlos Baez is a leading international expert in mathematical physics and category theory. He has published over 105 papers in leading journals; his Google Scholar citations total a phenomenal 13,500, with over 4,200 since 2016; his h-index is 53. In his 1995 publication, Dr. Baez proposed new connections between topology and category theory based on ideas from quantum field theory. In particular, his Cobordism Hypothesis gives a complete description of manifolds and cobordism between them in terms of algebra. Its impact on topology could be seen in Lurie’s work in 2009, and Ayala-Francis’ work in 2017. It is therefore fitting that he was elected fellow of AAAS in 1999. In 2013, he was honored with the Levi L. Conant prize of AMS for the best expository paper published by the Notices. In recent years, Dr. Baez has helped to establish a number of new fields in mathematics and mathematical physics, in particular “higher category theory” generalizes categories to n-categories; this is now important in algebraic topology thanks in part to the Cobordism Hypothesis, but also in algebraic geometry and elsewhere. “Higher gauge theory” is now understood to be important to the study of string theory and M-theory. Applied category theory", his current field of study, uses categories in a wide variety of topics from chemistry and electrical circuits to the design of software.

Dr. Baez is a dedicated science communicator. In 1995, he gave an AMS short course. Beginning in 1993, he took advantage of the internet before the world wide web to start what could be considered the world's first science blog. "This Week's Finds in Mathematical Physics" started as a weekly roundup of new papers, but grew to explain many areas of mathematics and physics. After 300 issues by 2010, he switched a focus toward environmental issues, and began the Azimuth Project. His accomplishment led him to give a plenary talk at Neural Information Processing Systems 2014, and by now his blog "Azimuth" has received over 3,600,000 hits.

At UCR, Dr. Baez is also known to be a highly accomplished mentor. He is an excellent classroom instructor at all levels, starting with freshmen calculus. He is a highly sought thesis mentor. A year ago, he was given one of the two campus-wide “Doctoral Dissertation Advisor/Mentoring Award”, an award for which he was nominated by his former graduate students, many of whom are currently in various leadership positions. For many years, Dr. Baez has served as a role model in promoting diversity. In 2018 and 2019, he also led the organization of the Riverside Mathematics Workshop for Excellence and Diversity and brought together notable speakers from outside and faculty at UCR in a series of mathematics lectures and extended discussions.

Dr. Baez is an excellent mathematician, an accomplished mentor, and a persistent science communicator. He conducts his research, mentorship and public service with social conscience. For all these reasons was named a fellow of the AMS.

Let us help you with your search